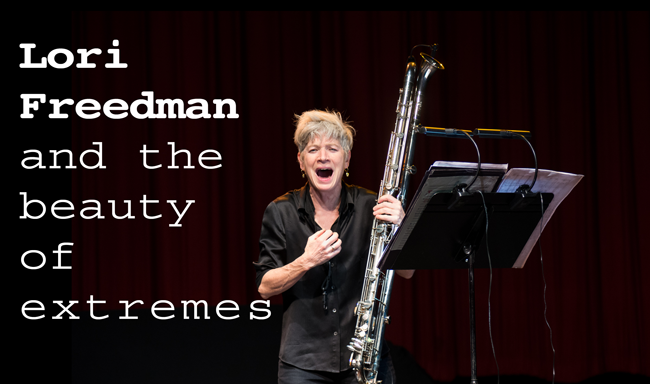 If there were some sort of measuring tool that could compare Classical music with cheeses of the world on a one-to-one basis — where Pachelbel’s Canon would be Cheez Whiz and Stravinsky’s Le Sacre du Printemps would be some strain of blue that took you twenty years to work up the nerve to try — well, Lori Freedman’s “Virtuosity of Excess” tour would have to be well off that scale out beyond the farthest margins of Epoisse (a curd so odorous, it was banned from public transport in France), or perhaps even further — can one make cheese from platypus milk?

That’s not in any way to suggest that Lori’s music has anything malodorous about it. Pas du tout. It’s more a comment on her audience, which for deeply nuanced individual reasons has come to revel in her extremes.

It’s arguable that what she’s doing isn’t Classical music anyway. But it draws from many of the same roots, and being a fellow clarinet player who once played bass clarinet alongside Lori back in the last century (it was Le Sacre, which is scored for two bass clarinets), I know her roots. Now I’ve come to get to know her routes.

I had the good fortune to sit with flautist Mark McGregor who’d come out to the Fox Cabaret to hear, above all else, the Brian Ferneyhough work. He explained Complexity music, which I paraphrase here broadly: The composer, without going beyond the instrument’s physical capability, employs myriad layers of complexity (such as assigning individual contrapuntal lines to different fingers) in an attempt to present to the audience a picture of the performer either breaking down or breaking through psychologically. “So, it’s sort of like a snuff film” I asked and Mark snorted with laughter, “I guess you could put it that way.” The title of Lori’s tour “The Virtuosity of Excess” is a quote from the French composer Raphaël Cendo, referring to the exploration (and sometimes exploitation) of the beauty of extremes.

Enter the “Virtuosity of Excess” tour

And then, before anyone could say, “Release the Kraken”, onto the stage strode Lori brandishing her contra-bass clarinet like a kalashnikov.

As we listened to Brian Ferneyhough’s Time and Motion Study #2 for bass clarinet, I started to get the full measure of Lori’s virtuosity. She puts her entire body, voice, and being into her playing. It’s so immediate and raw because what she’s after is emotional virtuosity.

Paul Steenhuisen’s Library on Fire for bass clarinet followed in what was by now an established pattern of extremes. This multi-movement, multi-music-stand work again showed how Lori transcends the cerebral by laying bare her humanity. Steenhuisen is a deep thinker able to layer complexity with the best of them, so it’s to Lori’s credit how she also brought warmth and humanity to the work — whether mumbling feverishly sotto voce or sucker punching us from the stage.

There’s something funny about Lori’s stage presence too—on account of its emotional ferocity. After screaming, squawking, and committing every excess imaginable, she always finished with a perfect little smile and thanked us all for listening. The contrast suggests some sociopathic older sister who’d just strangled her kid brother and now stands before us with one of those can-we-go-for-ice-cream-now smiles. Perhaps that’s why her own composition, Solor for bass clarinet (which she played from memory) lined up best for me. It certainly had its wild and raw moments, but overall I think it came from a more meditative place in her.

Raphaël Cendo’s Décombres for contrabass clarinet and live electronics was the coup de grâce of the evening. It was also the death knell for my ears, but I stood there anyway basking in the sheer monstrosity of it all like I was taking on Niagara Falls full force. To be in the presence of someone so beautifully uncompromising, so committed to her art — what glory!

After the show when people were mobbing her, I went up with the intention of saying something all-encompassing about what it means to be that emotionally revealed in art, but I couldn’t find the words and instead blurted out some nerdy clarinet-player nonsense about how “underneath everything, I could still hear a solid good clarinet sound”. It was entirely true of course — so always tactful — she laughed kindly as if I’d said, “Gee Mr. Pollack, you shure know how to mix them colours good.” It’s probably the most douche-baggey thing I’ve ever said…

Pingback: Lori Freedman, “Can I take you to all of my concerts?” | Jason Hall
Pingback: Jason Hall » Testimonial – It’s to me perfect journalism