Craig began instrument building at 16 with a simple dulcimer. It now hangs on the living room wall, a reminder of his modest beginnings amidst the collection of harpsichords, clavichords, virginals, and fortepianos.

The revivalist movement in musical-instrument making began in the 1930s and, by the 1960s, classical music circles began to appreciate what original instruments could bring to performances of the great Baroque masters (Bach, Handel, Vivaldi and so forth).

In 1975, Craig was asked to work on a two-manual French harpsichord. The challenge of this task opened up a new world for him. He worked on kit instruments over the next few years, but could hear and see the limitations of factory-produced kits. So in 1978, Craig headed down to Berkeley to learn the craft of building early keyboards. This led him to a rediscovery of the building methods of old-world craftsmen, after whom he modelled his instruments.

“The harpsichord I envisioned combined a perfect balance between the tonal intricacies of the sound and the beauty of the instrument and its decoration,” he said.

My tour across Craig’s living room was chronological and, although time seemed to fly, I know 350 years of keyboard development passed before I reached the other side.

Gazing at the collection, I asked Craig if people who buy his instruments are performers or simply collectors. He said that most buyers are in fact performers, although he cited one large glossy magazine in Palm Springs, California that posited the notion that you’re not really on the ‘A’ list until you have your own French Double Harpsichord. 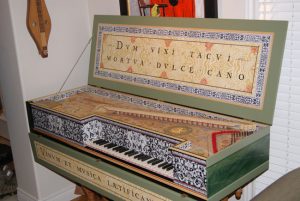 The grand old lady by the front door is an exquisitely ornate 1608 virginal. She was inspired by two 17th century Flemish instruments made by the Ruckers family of Antwerp. I was so entranced with the sheer beauty of this instrument that I could hardly follow his description of its nifty short octave bass, which expands the lower octave downwards by replacing the chromatic black notes with diatonic white tone pitches (although, you wouldn’t know to look at it). Sorry for the tech-speak, but I think this means that the player can play down to a G below the expected low C, but my eyes were feasting on the trompe l’œil, elaborate Latin mottos, and swirling arabesques.

As with all of his instruments, the virginal was painted by Craig’s mother, Olga Kornavitch-Tomlinson. An artist in her own right, she decorates the instruments by combining historical authenticity and her own instincts as an artist. 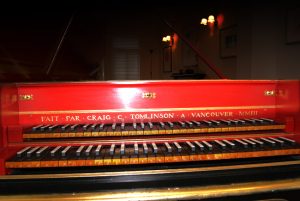 The harpsichord in is a replica of one Craig received a Canada Council grant to travel to Scotland to research. To research the instrument (this one was based on a Pascal Taskin of Paris, now residing in a collection in Edinburgh), Craig had to photograph, measure, disassemble, and incredibly, even get inside it.

Perhaps to dispel the notion that early music people don’t have a sense of humour, Craig told me the story about the Scotsman who snuck up on him while he had his head deep inside the 1769 harpsichord, and thundered the “biggest and loudest chord” Craig had ever heard played on any harpsichord.

Once again, there was a techie segment to the tour and Craig showed me the transposition block, a slab of wood used to shoehorn the instrument up and down in pitch.

In an age of globalization and standardization, it’s hard to imagine some of the madness that goes on in musical circles with regard to pitch. North American orchestra’s tune to A=440 Hertz, while their European counterparts tune to A=442 (or A=444 if you’re in Vienna, or A=444.5 on Kärntner Strasse between the hours of 3 and 5 pm). Geography plays a part in pitch, as does time. In fact, pitch has crawled up steadily since the heydays of most of these instruments. Since Bach was around, they’ve crawled up to the tune of a full semi-tone.

Curiously, this rise of an exact semi-tone makes the transposition block possible. Craig pulled the block out from the left side of the keyboard, shunted the keyboard to the left (into the vacant place), and then pushed the block into the right side and, voilà, the entire instrument now played a full (Baroque) semitone lower. 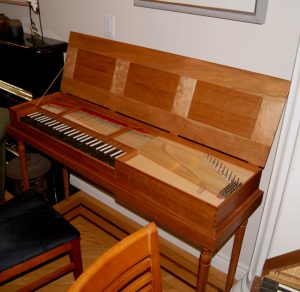 The clavichord dates back to the 1400s, but the instrument in Craig’s studio was a replica of one from 1784. Curiously, its visual simplicity seemed downright West Coast, reminiscent of the beautiful Arts and Crafts style furniture I’ve seen on Salt Spring Island and the Sunshine Coast. Craig attributed this to the cherry wood and, of course, its admittedly unembellished appearance.

He doesn’t play much any more, he said, but showed me how difficult an instrument a clavichord can be owing to its soft, but exacting touch. There’s no margin for error. He tapped a few neat and precise chords and the instrument whisper shyly. Take note you who might be thinking of buying one of those condos in False Creek—this is the instrument for you. It has a projectional range of about three feet, guaranteed to disturb no one, and it’s very soothing on frayed nerves. 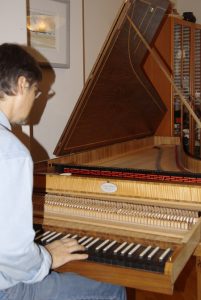 There’s a funny thing about the origin of the name of the modern instrument, the “piano”. In 1713, when harpsichord maker Bartolomeo Cristofori invented an instrument that could play both soft and loud (unlike the harpsichord), he called it a “loudsoft” or fortepiano. This was the instrument Haydn, Mozart and Beethoven wrote for (well, before old Ludwig smashed his to bits that is), and it was the immediate precursor to today’s pianoforte. You say fortepiano, I say pianoforte.

The name difference seems moot, but the two are quite different. While the fortepiano can and does have dynamics, it was no match for the thundering sonorities in the age of Romantic composers (Chopin, Liszt, Rachmaninoff) and so it fell from favour when the robust pianoforte appeared on the scene.

In recent decades, an interest in authentic performances of earlier works necessitated the revival of the comparatively delicate fortepiano. In fact, the Vancouver Opera will be using Craig’s fortepiano in their performance of Mozart’s La Clemenza di Tito in February 2011. It is a beautiful instrument based on one Anton Walter built in Vienna in 1795. The original now resides in the Germanisches Nationalmuseum in Nuremberg.

Techie bit: The fortepiano doesn’t have pedals like modern pianofortes; it has knee levers. I’m sure it works better than it appears, but the fortepianist sustains notes by raising a damper rail—with his knees. “The right lever raises only the treble dampers and the left lever raises the entire damper rail”, said Craig. I tried not to resist the uncomfortable imagines of the poor player squirming away on the fortepiano bench, first knees, then legs and, finally buttocks join in. 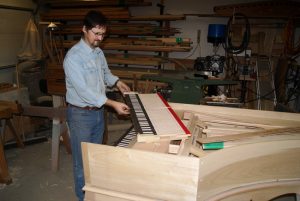 We headed out to the workshop and passed Craig’s son, Brian. Craig remarked that Brian preferred the family Yamaha and the music of the French Impressionists (Ravel, Debussy), and then snorted, “Kids these days…”

Given that the focus of this article is about local craftsmen, I asked Craig if any of the materials were local. Outside of the holly and the occasional raven feather found in nearby Chatwin Park he has used in the quills (the plucking mechanism in harpsichord jacks), he found that he had to use the same woods that builders used two and three centuries ago. He experimented by building a harpsichord using local Sitka spruce, but found the sound “entirely different”.

For this reason, he makes regular pilgrimages to Mittenwald in southern Bavaria—a haven of fine European woods—to buy the Swiss pear, German spruce and boxwood his instruments need. He jokes about the time he beat the Steinway buyers there, leaving them only leftovers. Other woods, such as American poplar, come from the US East Coast.

The workshop has one harpsichord in the works and Craig showed me various phases of its construction. He showed me blueprints made from measurements taken in Europe, which he laid over the instrument, like a dressmaker. In the corner, piles of pear wood, cherry, popular, German spruce, and boxwood waited to be shaped into the exquisite instruments I’d just seen in his house and would one day grace the concert halls of Vancouver and the world.

To order a keyboard of your own or for more information about Craig Tomlinson, see tomlinsonharpsichords.com