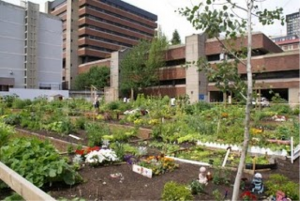 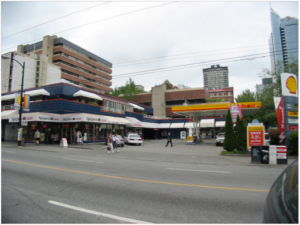 Burrard and Davie – Then

It’s not magic. At street level it may look like magic, but community gardens are not the work of some cosmic Aquarian happening or even merely the work of avid gardeners. They are a carefully orchestrated balance between government, property owners, community advocates and, of course the citizenry you see toiling the soil. And therein, lies the beauty.

Take for example, the highly visible Davie Village Community Garden on the northwest corner of Davie and Burrard. A few short years ago when condo developments were sprouting on every corner of the city, Prima Properties (its property developers), wanted to cash in and redevelop the existing Shell gas station and mini mall into a new high rise condo tower, they were met with opposition from the West-End Residents’ Association and other area interest groups fearing that the character of the Village would be threatened.

This property, 1157 Burrard, falls in the cross hairs of many conflicting priorities. For example, nearby St. Paul’s hospital has an influence on the property and how it’s developed, but doesn’t own it. So when Prima properties applied for a permit to develop the site as a mixed-use high-rise development, the city declined it.

Today, Seymour Community Garden is no more and it is remembered with some bitterness by its former gardeners who were given a scant two weeks to vacate the property before the backhoes arrived. According to Jon Lau, a member of Davie Village Community Garden Committee, “Rumours undermined the truth” and in fact, gardeners were told that they’d need to vacate any time between January and April, but as it happened, January was the month and this took many gardeners by surprise.

Jon sees the Seymour Garden, with which he was also involved, as a learning process on the path to the Davie Village Garden. “If not for Seymour Garden, Davie Village Garden couldn’t have taken place”, he explains even while admitting that “each garden has its own personality”. Jon is philosophical about the impermanent nature of these gardens, “I don’t look at it from the standpoint of longevity…I ask what can we do with the time we’ve got?”

Jon reflects that the single most common question from those visiting the Davie Village Community Gardens during the Olympics was, “How did you guys do this?” How it’s done is through community integration.

In midsummer 2003, Vancouver City Council approved a motion supporting the development of a “just and sustainable” food system for the City of Vancouver.

The intention was to develop a system in which food production, processing, distribution and consumption would be integrated to enhance the environmental, economic, social and nutritional health of a particular place. City Council formed the Food Policy Task Force and in 2007, unanimously adopted the Vancouver Food Charter, an ambitious vision based on five principles:

Encouraging community gardens also dovetails nicely with the city’s own Greener City Initiative, a mandate for Vancouver to become the greenest city in the world by 2020.

Most of the city’s community gardens are not on private land; they are on public lands such as parks and transportation corridors (most notably Arbutus Victory Garden, as its name suggests owes its longevity to its origins as a Victory Garden during the war). Community gardens developed on private land are naturally beholden to the property owners, but the property owners are incentivized by various regulatory bodies that provide tax exemptions for hosting the gardens.

Under the Prescribed Classes of Property Regulation, property owners can temporarily have their properties reclassified from Class 6 (business and other) to Class 8 (recreational property/non-profit organization), which can provide them with up to 70% on taxes. It’s easy to see their generosity in putting up the land, including the garden infrastructure, in exchange for a 70% cut from their yearly (in the case of 1152 Burrard – $345,000) tax bill as merely a way of skirting property taxes.

Still, the property could remain fenced off and ugly as was the case with the property at Davie and Howe, which remained a hole in the ground for the better part of a decade. Opting to host a community garden on private property is not without its headaches. Take for example the South Central Farm in Los Angeles, which pitted developers against urban gardeners (including actor, Daryl Hannah), and went on to be the subject of documentary, The Garden.

“The developer has to really get involved”, says Jon. Prima properties needed to form a relationship between the community, foster a gardening committee and remain involved with the project; otherwise, it wouldn’t work.

To that end, they remain participants in other West-End activities, such as Davie Days. According to Jon, the success of this collaboration “shows in the garden”.

There are numerous community groups with an active interest in community gardens. Vancouver Public Space Network (VPSN) has a mandate “to preserve and celebrate public space as an essential part of a vibrant, inclusive city”.

It has been instrumental in setting up several community gardens including both the Seymour and Davie Village ones. Also, West End Residents’ Association (WERA) with Gordon House and the YMCA are proposing a new community garden on land governed by the Vancouver Park Board.

One Davie Village gardener, Bob Cassidy, has three plots, which keeps him buzzing around on a daily basis. “I’ve met people of all ages and from all walks of life”. He described the monthly work parties, which bring all the gardeners together and, of course, the curious who are drawn to this inviting urban oasis.

With the large homeless population in the downtown core, it is natural to assume that light fingers might prevail and tomatoes go missing. Jon takes theft by local hungry and homeless folks in stride, “if you want to have a tomato, grow ten”. Other gardeners are more vigilant about protecting their labours.

There’s also the confusion arising from the perimeter plots (plots next to the sidewalk), originally designed to be open to everybody to garden, but this arrangement caused friction between gardeners, so all plots are now assigned. Perimeter plots continue to supply food to the nearby Burrard Youth Shelter.